Die Casting The Future In Aluminum 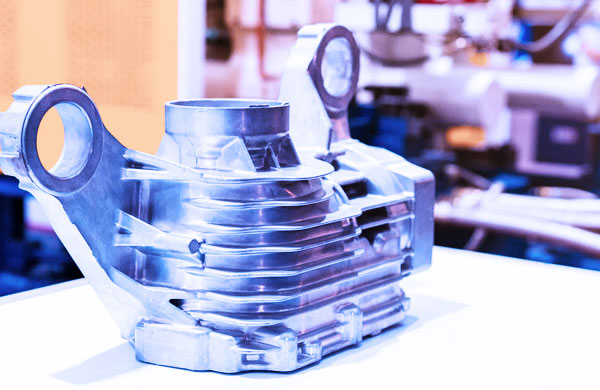 Aluminum is a highly versatile material that can be shaped or reshaped into a variety of products. It is a lightweight material with high dimensional stability, making it a suitable material for die casting.

What is aluminum die casting?

Aluminum die-casting is a method used to create metal parts. The process begins by melting aluminum bars and then placing them into a specifically-designed mould to obtain the desired shape for the parts. The cold chamber of the casting machine is then used to cool the molten aluminum in order to prevent damage to the machine due to excessively high temperatures.

The cold chamber machine separates the melting pot and the molten aluminum alloys ladled from the pot into the die under high pressure. After injecting the molten aluminum, some time needs to elapse before it entirely solidifies. The final step is to separate the two halves of the mould to reveal the aluminum cast.

Products manufactured using this process have a proven track record of being smooth, eliminating the need for minimal machining so that the product can be delivered quickly. Furthermore, there is less wastage as the die-cast mould can be recycled multiple times before natural deterioration.

The benefits of die-casting

Aluminum is a non-ferrous metal, die-casting it has the ability to produce parts that are lightweight and complex without sacrificing its strength while enabling a multitude of surface finish options that conventional extrusion or machining can’t create.

In addition to its versatility and ability to be used across multiple industries, the overall dimensional stability of aluminum is a major advantage of the die-casting process.

Aluminum die-cast parts are able to withstand higher temperatures compared to non-ferrous materials. These parts are highly resistant to corrosion, highly conductive, have improved stiffness, and benefit from a higher weight-to-strength ratio. Since the casting process is based on mass production at increased speeds, a high volume of die-cast parts can be produced quickly and cost effectively as compared to alternative casting processes.

Use cases of aluminum die-casting parts

Die-cast aluminum alloys have the advantage of being lightweight in their natural form. As a result, various industries use them extensively. From large structures such as bridges and commercial buildings to essential parts in most vehicles, die casted aluminum parts are present in structures and gadgets all around us. Some of their main uses are mentioned below:

Furniture – Owing to the increased demand for long-lasting furniture, interior designers and architects have also adopted the use of aluminum die casted products thanks to their improved strength, resistance to corrosion, and affordability. This has led to the production of a variety of home and office furniture like door locks, knobs, hinges, and other fittings.

Aerospace – Die-casting also plays a pivotal role in the aerospace industry as some of the most crucial parts like aeroplane engine piston heads, cargo loading housings, fuel system parts, aeroplane distributor cap housings, as well as lighting fixture parts and electronic enclosures detention ring parts which are all made of die-cast aluminum. Aeroplane engines require die-cast aluminum in the production of complex parts like transmissions and engine blocks. This level of complexity and tight tolerance cannot be achieved by using parts made using conventional procedures.

Transportation – The transportation industry is quickly adapting and evolving to changes in the market. This has led to the need for the industry to master the use of aluminum parts through die-casting. In fact, the transportation sector has become the most competitive and largest end-use segment for die-cast aluminum. The tightening of emission laws by governments and regulatory authorities coupled with consumer demand for more fuel-efficient vehicles has increased the need to use this process. Manufacturers are replacing iron and steel components in their vehicles with lightweight die-cast aluminum ones in order to increase overall fuel efficiency and reduce emissions.

Construction – With the construction industry growing in several parts of the world, especially in developing countries, the need for die-cast aluminum materials is experiencing a rapid surge. Aluminum die-casting is associated with the creation of several construction components including windows, cladding, curtain walling, prefabricated buildings, shop partitions, and fittings.

Healthcare – Die-cast aluminum components have also found their way into several high-tech machines used in hospitals like MRI scanners and cath lab machinery. As these machines are encased in a body of aluminum, maintenance costs are reduced drastically.

The future of die-casting aluminum is bright

Die-cast aluminum products will continue to find their way into several other industries owing to the growing demand for automated manufacturing and quality products. This means that there is infinite potential for die-cast aluminum and its true capabilities are still yet to be explored and realized. It will be exciting to see how this revolutionary material can be implemented for various uses moving into the future.

You are using an outdated browser. Things may not appear as intended. We recommend updating your browser to the latest version.